“Don’t move!” I pleaded in the calmest and quietest whisper I could speak in while still getting my six-year-old daughter’s attention.

Wren froze and asked, “Why not?” in a not-so-quiet whisper with a perplexed look on her face.

“Shhhh,” I whispered again, holding my finger up to my lips and barely making a sound. I gestured for her to stay put for a second longer as I cautiously moved out of the Jacuzzi, sat on the edge, and leaned over to reach for my camera.

There went my chance at winning a Mother of the Year award as I snapped a picture of my daughter with a bear in the not-so-distant background. It was a great shot, though! We quickly moved inside and watched as the bear grazed a bit more in the yard of the cabin where we were vacationing in Big Sky, Montana. Wren stood fascinated while she watched it lumber about and thought the picture was awesome.

That was the third bear we had seen in as many days since we had been staying in Big Sky. We had also seen a moose and her calf walk right up to where the outdoor Jacuzzi was. We knew we would see even more wildlife, not to mention the iconic sulphur springs and geysers, when we road-tripped 50 miles the next day to the west entrance of Yellowstone National Park. I read fun facts about the park out loud as we drove, such as that it became the world’s first national park in 1872 and the area is a caldera that was formed 640,000 years ago from a massive volcanic eruption.

“Whoa, that’s even older than you, Dad!” our 14-year-old son, Griffin, joked from the backseat.

My husband, Oliver, smiled and replied with an unenthused, “Ha, ha. Very funny.”

We were excited to see the Yellowstone National Park sign as we entered the park. We were still in Montana at the time, but it was amazing to think the Park spanned so much area that it bordered Wyoming and Idaho, too. We drove along, taking in the beauty of the wide-open views, and heard elk bugling when we rolled down the windows.

We got out of the car and walked along a boardwalk path to see the sulphur springs. We were most impressed by the Grand Prismatic Spring in the Midway Geyser Basin. It was as big as a football field and as deep as a 10-story building. We learned the vivid, out-of-this-world rainbow hues were created by heat-loving organisms called thermophiles.

“The gurgling springs are just like our Jacuzzi!” Wren remarked.

“Except you’re not allowed to soak in there,” I reminded her.

We overheard a tour guide describing how the geysers and springs were formed from magma being closer to Earth’s surface.

“Liquid hot magma,” Griffin said in his best imitation of Dr. Evil from Austin Powers, which he clearly had seen one too many times.

“Good one, Dr. Evil,” Oliver said as he gestured for us to head back toward the car. “Now let’s drive over to Old Faithful.”

We could tell Old Faithful, the most predictable geyser in the park, was about to put on a show because the long, curved bench that surrounded it was starting to fill with geyser-gazers. We found seats right up front and waited. I closed my eyes and listened to the cacophony of different languages being spoken by the broad mix of international tourists nearby. It was wonderful.

Old Faithful started to sputter and steam. Griffin turned to us and said, “The geezer geyser’s gonna blow!” right as a huge plume of water shot high up into the air. Everyone clapped when it burst. Then, it soaked those of us in the front seats as its spray came down upon us. Everyone squealed with delight.

We could see the Old Faithful Inn in the distance and walked over to take a look. The expansive interior was impressive, and it was remarkable to think it was built in 1903 with local logs and stones. The stone fireplace was massive, and the wooden staircases with timber railings were gorgeous. We learned it had 327 rooms, a restaurant, lounge, and gift shop. We wished we had time to take a tour. 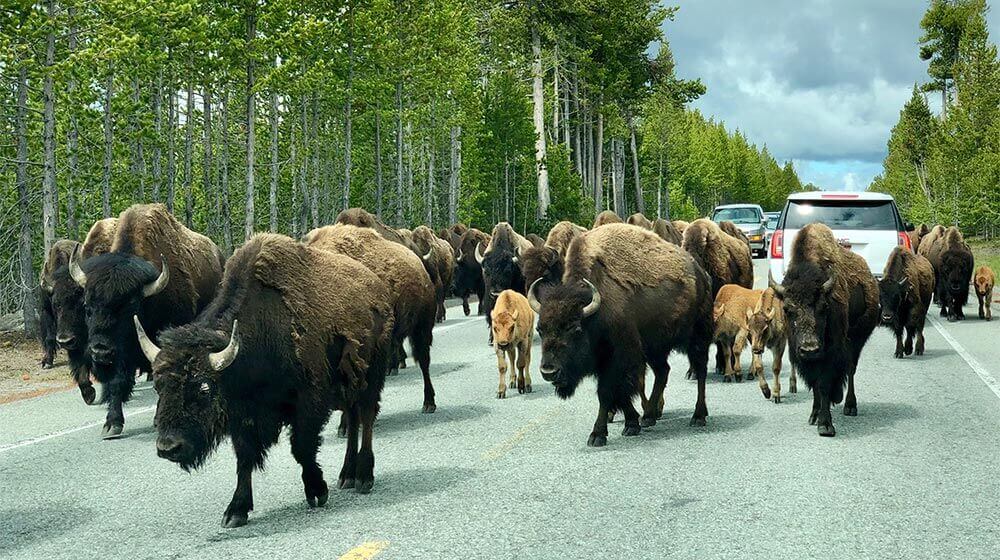 We were ready to head back to our cabin after a wonderful day of exploring Yellowstone when we noticed several cars pulled off the side of the road. We had slowed down two other times earlier in the day when we saw cars gather, and saw bighorn sheep and a bull elk in the distance but kept going. But we had to pull over and get out of the car when we saw a herd of bison close to the side of the road.

“Keep your distance,” I told the kids.

“Oh, so now you don’t want me to get too close?” Wren teased. Then Oliver noticed elk in the distance.

“If it’s a herd of bison, is a group of elk called a herd, too?” Griffin wondered out loud.

I was stumped, so I looked it up on my phone and read out loud. “It’s a gang of elk, sloth or sleuth of bears…”

“Sloth of bears? So is a group of sloths called a bear?” Oliver asked, only half-joking.

“Hmm,” I paused as I scrolled further down the list. “Nope, a group of sloths is a bed.”

We were all taking pictures and enjoying the amazing views and wildlife when I aimed my lens at Wren and whispered, “Don’t move!” Wren’s eyes widened in shock.

“I’m just kidding!” I said while we all laughed and headed back to the car.

Bring your family and explore the natural beauty of Yellowstone

Previous Story
Hopping Off in San Francisco
‹
Next Story
As Above, So Below

5 LGBTQ Things to Do in Puerto Rico