Everyone has a travel bucket list: the Grand Canyon, the Everglades, Navy Pier in Chicago, the Smoky Mountains, the Golden Gate Bridge, Times Square.

But what about a road-trip look at real America—or at least real quirky America? Especially in the Midwest, the roadside abounds with enormous fruits and vegetables, restaurants shaped like coffee cups, caves that once sheltered notorious outlaws, motels shaped like Indian teepees, giant animals of every species—the things that never quite make the pages of Travel & Leisure or National Geographic.

But where to start? Well, why not with one of the oddest of the odd, an actual grave plopped down in the middle of a county road near Franklin, Indiana? Roadwork a few years ago resulted in the discovery of several early 19th-century bodies in residence, along with one Nancy Kerlin Barnett, who died in 1831 and whose grave was protected from early 20th-century road builders by a very persuasive relative.

Punctuating his views with a loaded shotgun, he explained to the road crew that they could jolly well just build the road right around his deceased kin, eastbound lane on one side, westbound lane on the other. Eyeing the shotgun, that’s what they did, and to this day the sparse traffic along County Road 400 South divides to the left and right around Ms. Barnett’s grave. 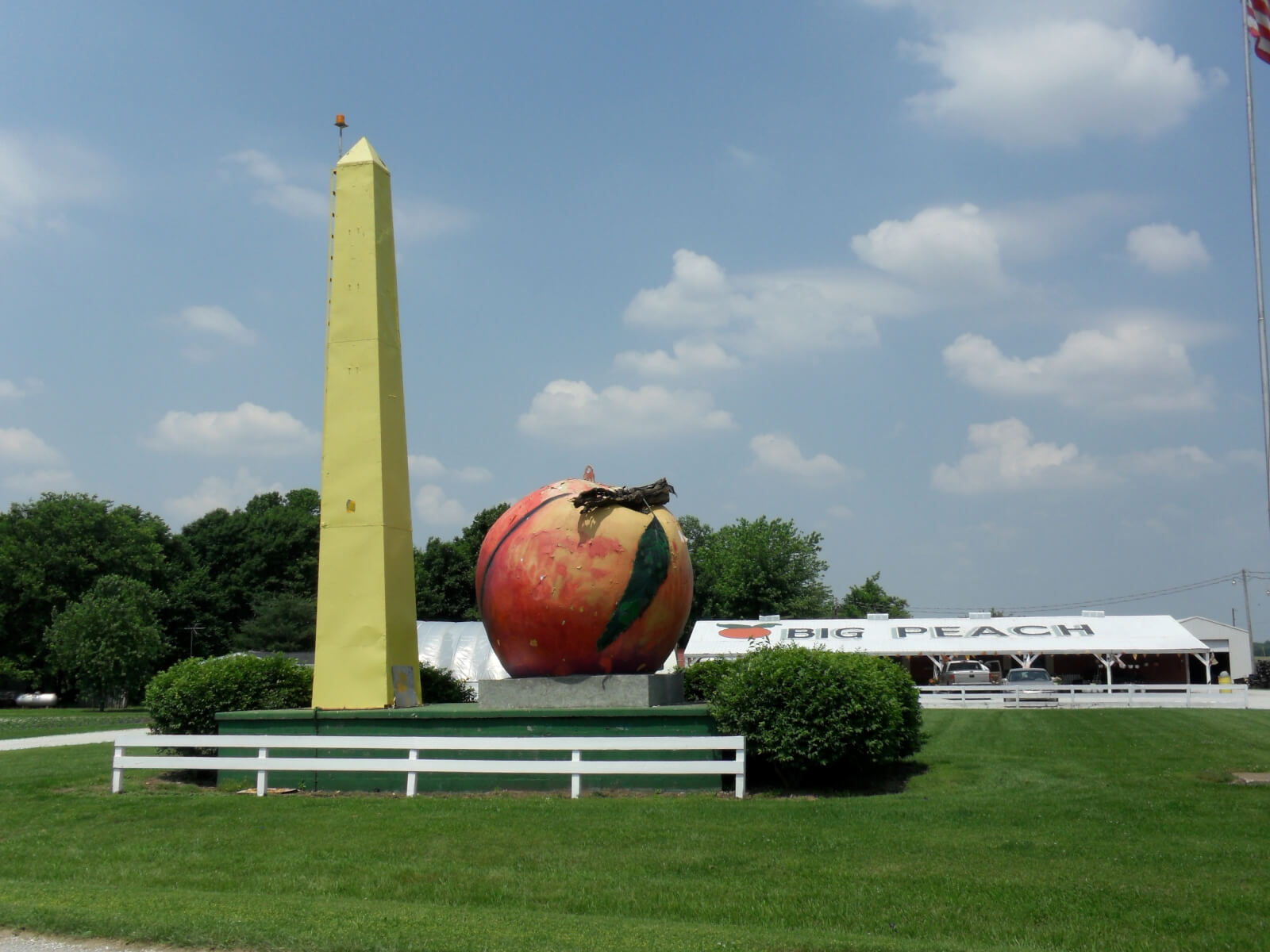 Many of the quirky sights date back to the early, pre-Interstate days of car travel, when families enduring long two-lane trips were eager for any excuse to stop and pile out of the family sedan for a break. And local merchants were happy to sell them anything they might want or need.

Plentiful examples are still out there: A Giant Peach, for example, towers over old US 41 in hilly, melon-rich southern Indiana, tempting travelers with a promise of luscious fruit and other produce at a large farmer’s market north of Vincennes.

Heading west into Illinois produces even more weird sights. At the Batavia Depot Museum, have a look at poor Mary Todd Lincoln’s sanitarium bed and her doctor’s log of her behavior. Farther downstate, take in the famous Gemini Giant, a 30-feet-tall behemoth along the old Route 66 at the edge of the little town of Wilmington. Standing in the parking lot of the defunct Launching Pad Restaurant, the big guy is outfitted in a Forbidden Planet-era space helmet, silver space boots, and holds a Jules Vern-esque space rocket in his huge hands.

The Gemini Giant stands tall—literally—on the list of hundreds of so-called “muffler men.” Relics of an older and less-reliable era of automobile transportation, these towering, usually male, figures often held car mufflers and were once used to advertise automobile service centers. But they’ve since been repurposed in as many different ways as the imagination can invent—Paul Bunyans, six-shooting cowboys, Indians, pirates, Vikings, bikini-clad ladies, and even a bloody-axe-wielding Frankenstein’s monster.

Today, authentic old attractions vie with modern, self-consciously kitschy versions created as homages to the earlier examples. Visitors enjoy wonderful examples of the latter in Casey, Illinois (pronounced KAY-zee), a little community determined to corner the unnaturally-large-object market with a collection of giant examples of everyday objects scattered all through town.

In Casey, your whole family can take a group-selfie in a Guinness-World-Record-size mailbox, ogle the world’s largest rocking chair (which unseated the previous largest, in Fanning, Missouri), listen to the mournfully random tones of the world’s largest wind chimes, wonder how they sharpen an enormous No. 2 pencil, measure a giant yardstick, and eye an ear of corn big enough to feed the whole county.

If there’s time, the Big Things in a Little Town Workshop offers a glimpse of how such big things are created.

Crossing the Mississippi River into St. Louis, travelers will find the World’s Largest Man-Made Moon, a meticulously realistic and detailed 3D version of our lunar orb. Atop the Moonrise Hotel just north of the world-famous Saint Louis Zoo, this moon is always full and never sets.

A few miles south of the Gateway City, in Bonne Terre, Missouri, take a boat ride on a crystal-clear, billion-gallon underground lake at the Mine at Bonne Terre. Sightings of the lake’s one fish—yes, there is only one—cost nothing extra.

Your visit will be even more weird and wonderful if you happen to be a scuba diver; the flooded mine is the world’s largest freshwater dive site. Its 100-foot visibility showcases mining oar carts, staircases, slurry pipes, and an elevator shaft. There is also plenty of mine architecture and equipment to be seen on walking tours through the dry section. Don’t be alarmed by the hand-lettered “safety record” sign claiming to be proud of only losing 1,367 tourists. So far.

It seems that the chief was shot and killed near Fort Yates in 1890 and buried nearby.

While we’re focused on subterranean sights, be sure to swing by Greensburg, Kansas, for a vertical hike down a spiral staircase into a 109-foot-deep well dug by very tired shovelers in 1888. Open to visitors since 1937 (except for the years following a huge tornado that decimated Greensburg in 2007), the Big Well Museum also showcases a huge, 1,000-pound meteorite—The Space Wanderer—unearthed nearby in 1949. 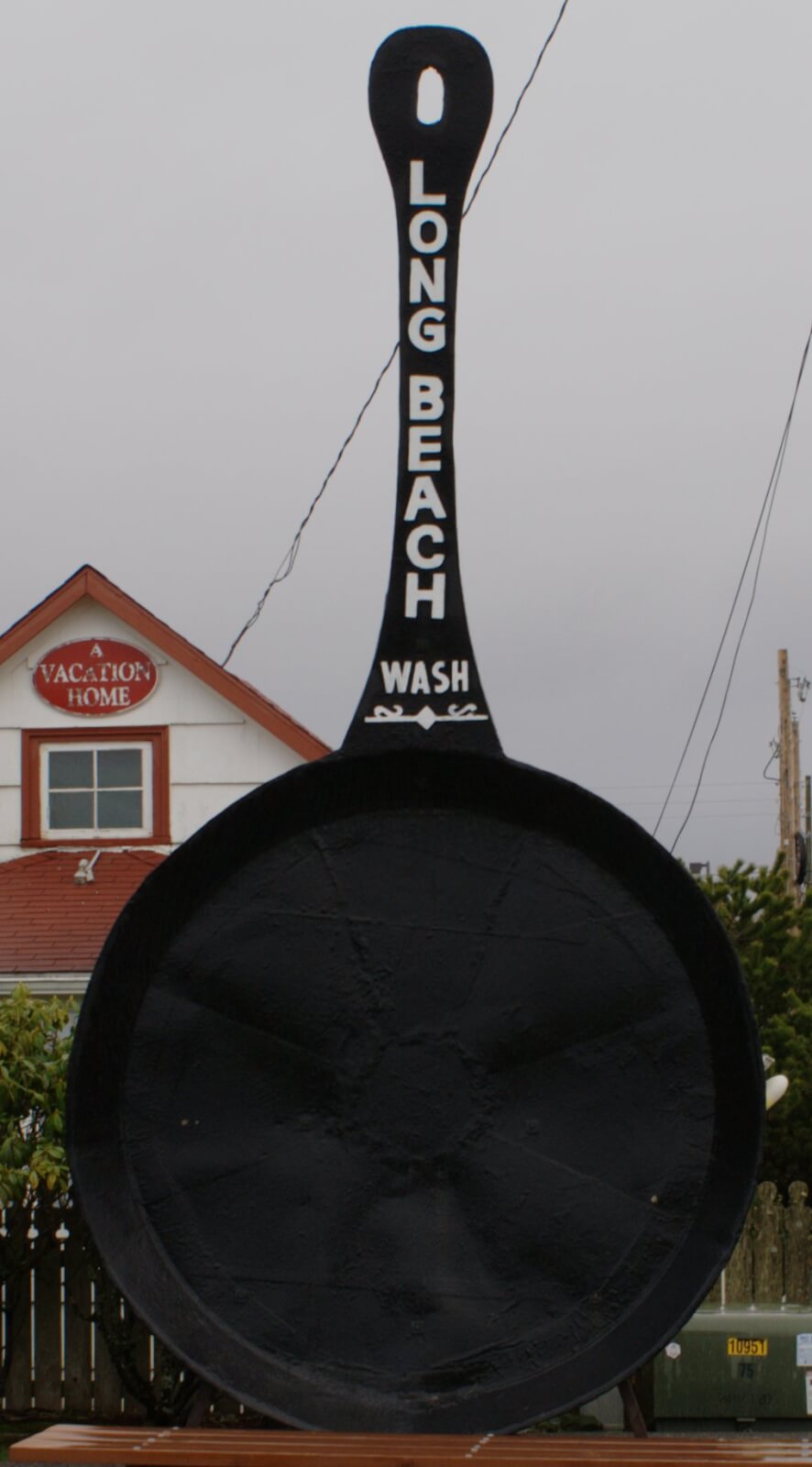 The World’s Largest Collection, etc., is small enough to go on the road in the back of the owner’s SUV, so your road trip might meet up with its road trip somewhere—where else?—along the road.

Getting back to full-size, set your course for Atchison, Kansas, and a statue memorializing Deafy (Dee-Fee) Boular, sidewalk bricklayer extraordinaire. After losing his legs in a train accident in the 1800s, he refused to use his leg prosthetics. Wearing special boots on what remained of his legs, he was just the right height to pave the town’s new sidewalks with paving bricks. Guinness claimed he once laid 46,000 bricks in one day.

No road trip is complete without a swing through the northern tier of Midwestern states. Check out Rapid City, South Dakota, where the city has placed statues of the nation’s presidents on street corners around town. James Monroe looks a bit like Mr. Peanut with his top hat and cane; Richard Nixon sits in a rocking chair, possibly pondering Watergate; a happy Ronald Reagan goes western in a cowboy hat and jeans; and stern Dwight Eisenhower looks about to order an invasion.

Wrapping up this road trip the way we started it, with an unusual grave, a great stop would be at the final resting place of famed Indian chief Sitting Bull, who is buried in Fort Yates, North Dakota. Or Mobridge, South Dakota. The towns can’t agree on who has him.

It seems that the chief was shot and killed near Fort Yates in 1890 and buried nearby.

But then in 1953, people from Mobridge dug up the chief’s bones and carried them south to be re-buried in a dramatic location with a beautiful Missouri River view more to the chief’s liking.

Having a good laugh, the Fort Yates folks said Mobridge was just commemorating some old horse bones they had stolen. The real Sitting Bull was still north of the Dakota line where he belonged. They installed a large boulder and a slab of concrete to prevent any further grave robbing.

Mobridge remains convinced they’ve got the real thing, though, and encased their bones—whoever or whatever they once belonged to—in a huge concrete vault, topping the grave with a granite marker and a carved bust of the chief.

So to be safe, you might want to visit both.

It just proves that weird America is wonderful America. So get off the beaten path and visit our endless variety of quirky takes on tourism.

Be sure to check out the other articles in the series, covering the West, the South, and the Northeastern states of the country.

Previous Story
Sun-Kissed Winter Reunion
‹
Next Story
The Weird and the Wonderful: The West