Hello, my name is Heather and I’m a vintage addict. They say the first step toward recovery is admitting you have a problem. I love old furniture… my house is beginning to look like the antique stores in which I inexplicably find—and lose—myself. I love old music… I rock out to everything from Bruce Springsteen to Nancy Sinatra. And I love old-school experiences, which is why I decided to drive my 1970 VW bus across Wyoming last summer in a National Lampoon-style road trip.

Now to be clear, while I love old stuff, I am still a product of the new century. So it was a delightful surprise to find that Wyoming offered me that perfect mix of old and new, of vintage country pleasures and modern twists.

Last of the Frontier

The least populated state in the US, with an area 2.5 times the size of New York State, it’s easy to see why Wyoming is regarded as one of the last vestiges of America’s Great Frontier. Steer clear of the major Interstate highways and you’ll be rewarded with a glimpse into what the early settlers must have seen in their trek West: vast uninhabited tracts of grassy rolling hills, then high, pine-studded mesas, and finally the impressive jutting expanse of the Rocky Mountains.

I must warn you, however, cruising along the backroads of Wyoming is not for those who seek security in numbers. You might not see another human being for hours. And if you do, make sure you give a wave… because that’s just what they do out there.

Texas might be the first place that comes to mind when you think of cowboys and the Wild West, but Wyoming takes their Western pride to another level. Plan your trip to begin in late July, when you’ll start your journey at the world-famous Cheyenne Frontier Days. 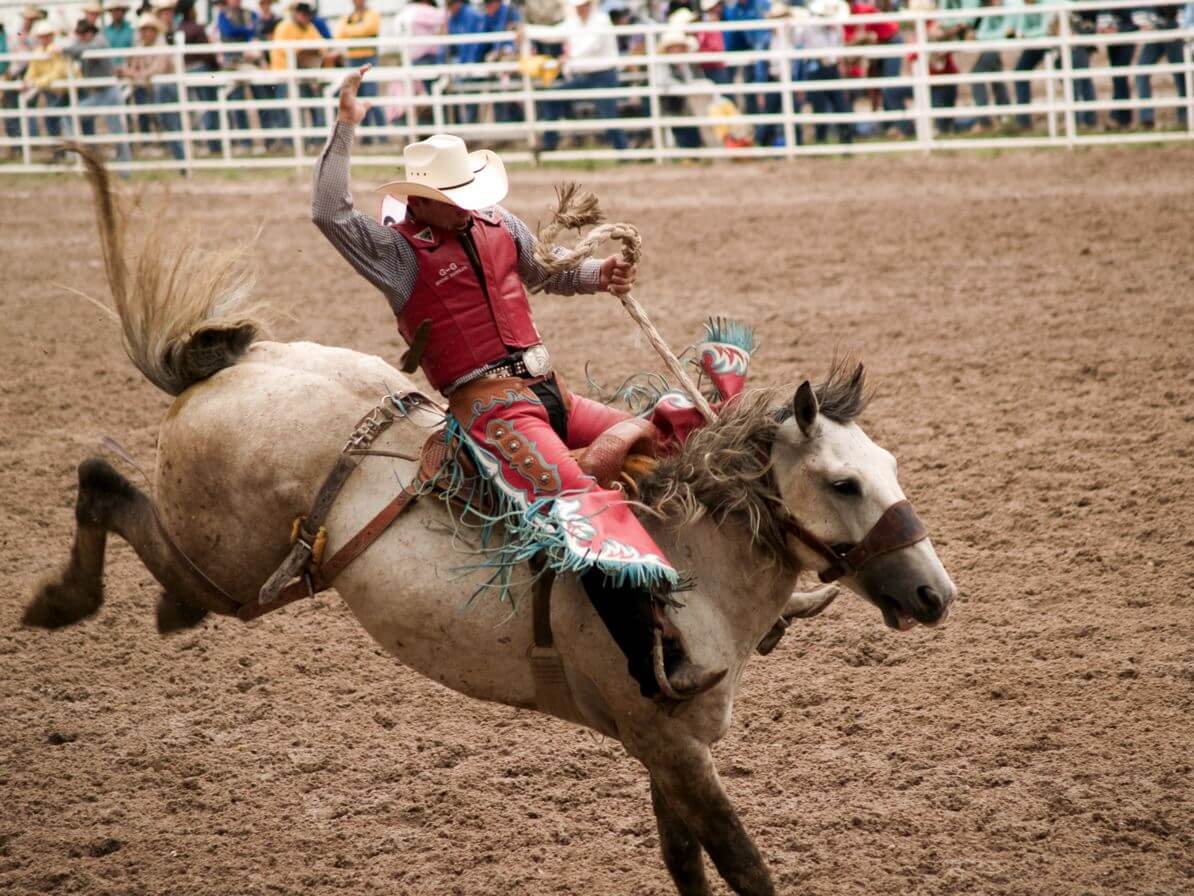 Dig out those cowboy boots from the depths of your closet and join more than 200,000 people to experience the “World’s Largest Outdoor Rodeo and Western Celebration.” More than 120 years old, the Cheyenne Frontier Days features 10 full days of events. Of course the rodeo is the main attraction, but there are also a ton of other activities to keep you and your travel buddies happy.

Explore the rich diversity of the many western Native American cultures at the Indian Village, chock-full of vibrant cultural performances, native food, and the intoxicating sound of flutes. Take a break from the Western theme and try to win a prize at the Carnival Midway, open every day until midnight. Like Western music? You’re in luck. The event spares no expense in bringing the hottest names and bands to the arena floor every night. And when you feel your energy flagging, fuel up again with their Free Pancake Breakfast, where they serve enough flapjacks to bury a bucking bull.

When you’ve had enough of all that rootin’ tootin’ fun, head north toward Casper, the second largest city in the state, which—with a population of less than 60,000—isn’t saying a lot. What Casper lacks in people, it more than makes up for in fish and fun.

The North Platte River is widely considered to be one of the best fishing spots in the nation. You don’t even have to be an expert angler to catch a monster rainbow trout on your first try. I wasn’t. For the best experience, visit one of the many excellent fishing outfitters, where you can rent your own boat and tackle, or hire a local professional guide to take you straight to the hidden hot spots. If you’ve only ever used a traditional fishing rod, take this opportunity to try your hand at fly-fishing. It’s a lot easier than it looks, and you’ll only hook your guide a few times before you start getting the hang of it.

But world-class, blue-ribbon fishing isn’t all Casper is known for. Every year since 1994, the Beartrap Summer Festival has transformed the sleepy woods and meadows atop Casper Mountain into a miniature bluegrass Woodstock for a single weekend in early August. Featuring some of the biggest names in bluegrass, roots rock, folk-pop, and every variation in between, the festival is beginning to draw the crowds. From 11 a.m. to sundown, kick off your shoes, grab a cold one, and let the rich sounds of guitars, fiddles, and cellos carry you to a different time and place.

Support Your National Parks at the World’s First

No trip to Wyoming is complete without seeing the world’s very first national park. A 3,500-square-mile chunk of pristine wilderness situated at the northwestern corner of the state—and trickling over its borders with Montana and Idaho—Yellowstone National Park should be a bucket-list staple.

Few other places in the country will afford you the opportunity to see vast herds of bison and elk roaming alongside the roadways. Pay attention and you might even spy a black bear and her cubs ambling along between the trees. Pull off to take in one of the hundreds of scenic views: roaring waterfalls, big grassy valleys, and breathtaking mountain vistas.

Visit the world-famous Old Faithful, a natural geyser that erupts nearly every 90 minutes like clockwork, but also take the path less traveled and visit some of the park’s hidden gems, such as Morning Glory Pool, with its psychedelic shades of yellow and green, Lamar Valley, which looks simply ethereal at both dawn and dusk, and Heart Lake, which requires an overnight hike.

Get Messy in Jackson Hole

After you’ve had your fill of epic park views, head south to the famed Jackson Hole to get your boots dirty with some more extreme pursuits. Framed by the jagged, postcard-perfect peaks of the Teton Mountains, Jackson Hole is an outdoor adventure-seekers paradise.

White water rafting through the Snake River Canyon is one of the more popular activities, with several companies offering the experience. Late spring and early summer is the best time to go, when the river is flooded with fresh snowmelt. If fast and furious isn’t your style, the area boasts a ton of more placid waterways for floating, canoeing, and paddleboarding. If you want to stay on land, hiking or biking the many mountain trails will be just as exciting and adrenaline-laced, considering you might get up-close and personal with the local wildlife. Just remember to keep a safe distance and carry your bear whistle. If you’re looking for an alternative to land or water adventure, take to the skies with a paragliding excursion.

You can still get a jackalope hunting license.

A true road trip isn’t just about getting from point A to point B. Make sure you stop and visit some of the oddities along the way.

After you knock the dust off your boots from the Cheyenne Frontier Days, head east to see the Ames Brothers Monument, a 60-foot-tall granite pyramid built in the 1880s during the construction of the transcontinental railroad. From there, mosey along State Highway 30 toward Medicine Bow, where you’ll find a tiny little cabin just off the side of the road, made entirely of fossils—called “the building that used to walk.” Don’t blink or you might miss it. Thomas Boylan built the historic Fossil Cabin in 1932 with a reportedly 5,796 dinosaur bones.

Take a day off from fishing the North Platte and drive east of Casper toward Douglas to see the former World’s Largest Jackalope. Why? Because there are few things more vintage Americana than a huge statue dedicated to the furry fraudster sold to tourists as a real Wyoming critter beginning in the 1940s. Part jackrabbit, part antelope, the jackalope was the clever creation of a skilled local taxidermist by the name of Douglas Herrick. For those of you who still believe in Santa, you can still get a jackalope hunting license.

Then, take the scenic route from Casper to Yellowstone and visit the less weird and more wonderful Big Horn Medicine Wheel, a sacred Native American site consisting of a circular wheel-shaped pattern of native limestone rocks, roughly 82 feet in diameter, and estimated to be anywhere from a few hundred years old to a few thousand years old. While it may be a national historic landmark, it is also still an active ceremonial site for local Native tribes, so respect is mandatory.

Memories for a Lifetime

There are so many interesting places right here in the United States that are often overlooked in our pursuit to collect passport stamps. Places like these—the wild and Western frontier of Wyoming—offer just as much excitement and memories, at a fraction of the cost. So I invite you to take a few weeks off work, pile into the old jalopy, and take a trip. You won’t regret it.

Best of the Beach