Prepare to congratulate me. I just became Heroic Hubby, Dynamite Dad, Fantastic Father-in-Law, and the Coolest Grandpa on Earth.

I have found the perfect way to recapture my youth doing all the things that cool kids did (and still do!) and pass those memories on to the rest of my family.

We wanted a special place to stay that would be comfortable for all eight of us. We rented a spacious yet cozy beach cottage.

On day one, fun for my wife and me revolved around the granddaughters, ages two and four. We sent the other adults (my two daughters and their husbands) to the Arnold Palmer golf course while we savored “kid time.”

When my wife and I hang with the little people, we do what they want to do. Attraction No. 1 was the beach. We played with waves, marveled at birds, and generally reveled in life. What’s we loved about North Myrtle Beach aside from the pristine sand and clear beautiful water, is that it isn’t loaded with throngs of people. There’s space to run around, enjoy the vistas, and in our case, let the grandkids run around.

In the evening, we met up as a group at Mayday Golf, a funky miniature golf course designed around the concept of a downed plane on a tropical island. We split up into two teams each including golfers and non-golfers for a fair match. The two-year-old got a lot of help from her daddy, and he showed us how to stroke the ball under the lighthouse and up the hill to the waterfall.

The next morning was all about the sun, sand, and surf. We also spent a fair amount of time at the world’s largest inflatable waterslide, affectionately called “The Hippo,” it is 36 feet high and nearly 180 feet long. It has three chutes—one straight, two curved—so it offers plenty of thrills.

Horses, tigers, and shopping—oh my!

My daughters and I loved riding horses on the beach; it was an epic adventure, something most folks never get a chance to do. The rides along the Atlantic were exhilarating yet also comfortable because the horses behaved exceptionally well, even for a city slicker like me.

The air was clear and salty and the waves curled onto the shore as we trotted through the sand, feeling like we were explorers discovering an exotic new land. Long after the ride ended, we’re still taking about the sights and our horses.

Later we hit the shops, which range from national brand outlets (major savings!) to unusual stores with one-of-a-kind objects and specialties. Talk about unusual offerings; one shop stocks a huge selection of olive oils and fine vinegars—tasty additions to my wife’s cooking.

The Tanger Outlet Mall sells all sorts of clothing and footwear, and there are coupons for Tanger stores and many other attractions—welcome news for anyone.

When the kids were ready for a change of scenery, there was a tiger preserve.

While Barefoot Landing has great shops and restaurants, I especially wanted to go there for T.I.G.E.R.S./Preservation Station. It’s home to tigers and cubs; you can even get your photo taken with one of the animals. That was a memory-maker—kids giggling and goggle-eyed as they got up close with tiger cubs usually seen only in books or on television.

Then there was Alligator Adventures, which has 700 alligators and crocodiles, plus exotic snakes and komodo dragons. The demonstrations hit home with the kids, who are fascinated by animals, and the girls’ expressions made for fantastic photos. For some tamer critters, we took them to a nearby carousel that has 41 animals cast from original molds, just like an old-time carousel. 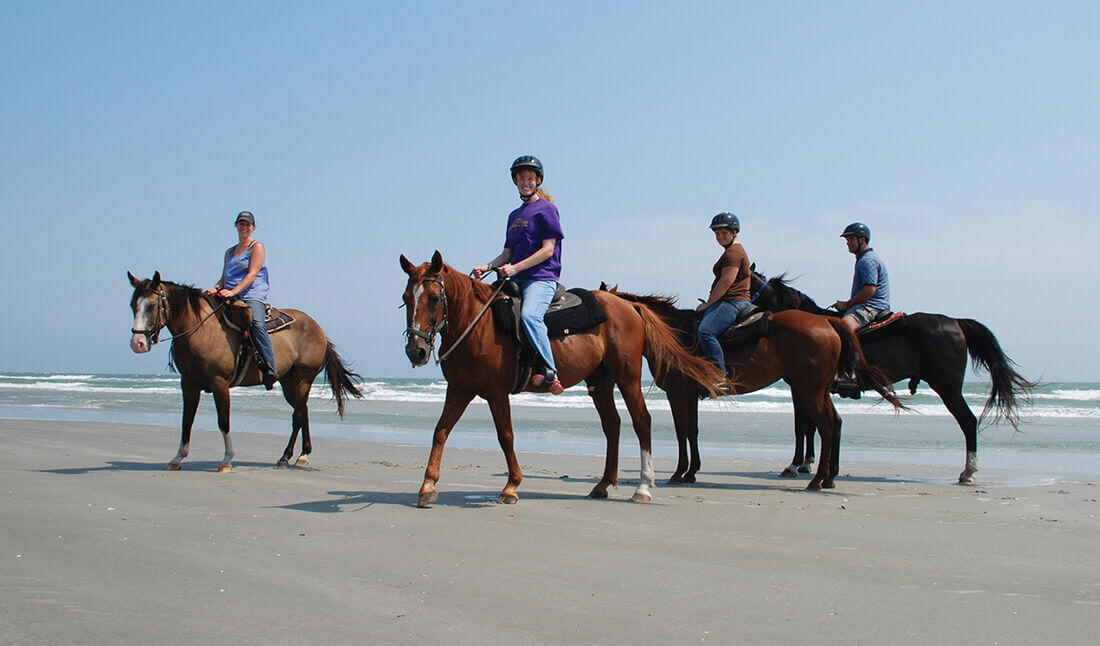 One of my sons-in-law, Jake and I were itching to go fishing. While most of our gang went to the Ocean Drive Pavilion & Amusement Park, Jake and I took advantage of the stellar North Myrtle Beach pier fishing. North Myrtle Beach has great fishing of all types, but we chose to fish off the pier on this occasion because there’s no license requirement. Not wanting too much of a challenge, we targeted Whiting with cut squid as bait. We were met with great success, and gave my wife prime opportunity to put one of her new gourmet olive oils to use for dinner.

On our final night, we went to Fat Harold’s Beach Club and danced The Shag, which was popular many years ago, and actually began in North Myrtle Beach. It’s a quirky, six-step dance that even my two left feet can do, and so what if I miss a step here or there? On vacation; we just let the good times roll.

With memories like these, I’ll be dancing forever. More importantly, I’m in step with my family.

Bring your family to fun at North Myrtle Beach.

Just the Two of Us