I stared out the window of our tour bus at mountains covered in lush green and scattered with a thick mist. My husband, Michael, squeezed my hand with excitement. We were here! Finally. It seemed like we had been waiting for this vacation forever.

Our first day in Hawaii was off to a magical start. The tour guide pointed out the famous “Stairway to Heaven” hiking path as we drove by and taught us a few Hawaiian words. Michael and I both knew aloha meant “hello”, but we didn’t realize that it also has other meanings. In Hawaii, aloha is used to mean hello, goodbye, I love you, or even to reference the spirit and philosophy of Hawaiian life.

When the bus arrived at the Polynesian Cultural Center we discovered a small courtyard of restaurants and shops. Michael’s eyes lit up when he saw the Hale Pops food truck serving gourmet Hawaiian hot dogs. He ordered a Cali Dog—a beautiful creation topped with bacon, fries, and spicy mayo. I opted to go to Tutu’s Sweet Shop to grab a pineapple Dole Whip. Given the choice between ice cream and real food for lunch, I’m going for ice cream. But I did steal a few fries from atop his hot dog.

When we entered the Center, our tour guide ushered us through the Polynesian villages directly to a performance in Aotearoa—or New Zealand, as it’s more commonly known. The Māori people performed a Haka for us—a ceremonial dance originally used on the battlefield. The performers used their bodies as percussion, stomping their feet and slapping skin in rhythm with their chant. Their faces were fierce; they widened their eyes and stuck out their tongues to intimidate their opposition. Each one of us in the room was captivated, and I could easily imagine the effect the ceremony would have on the battlefield. 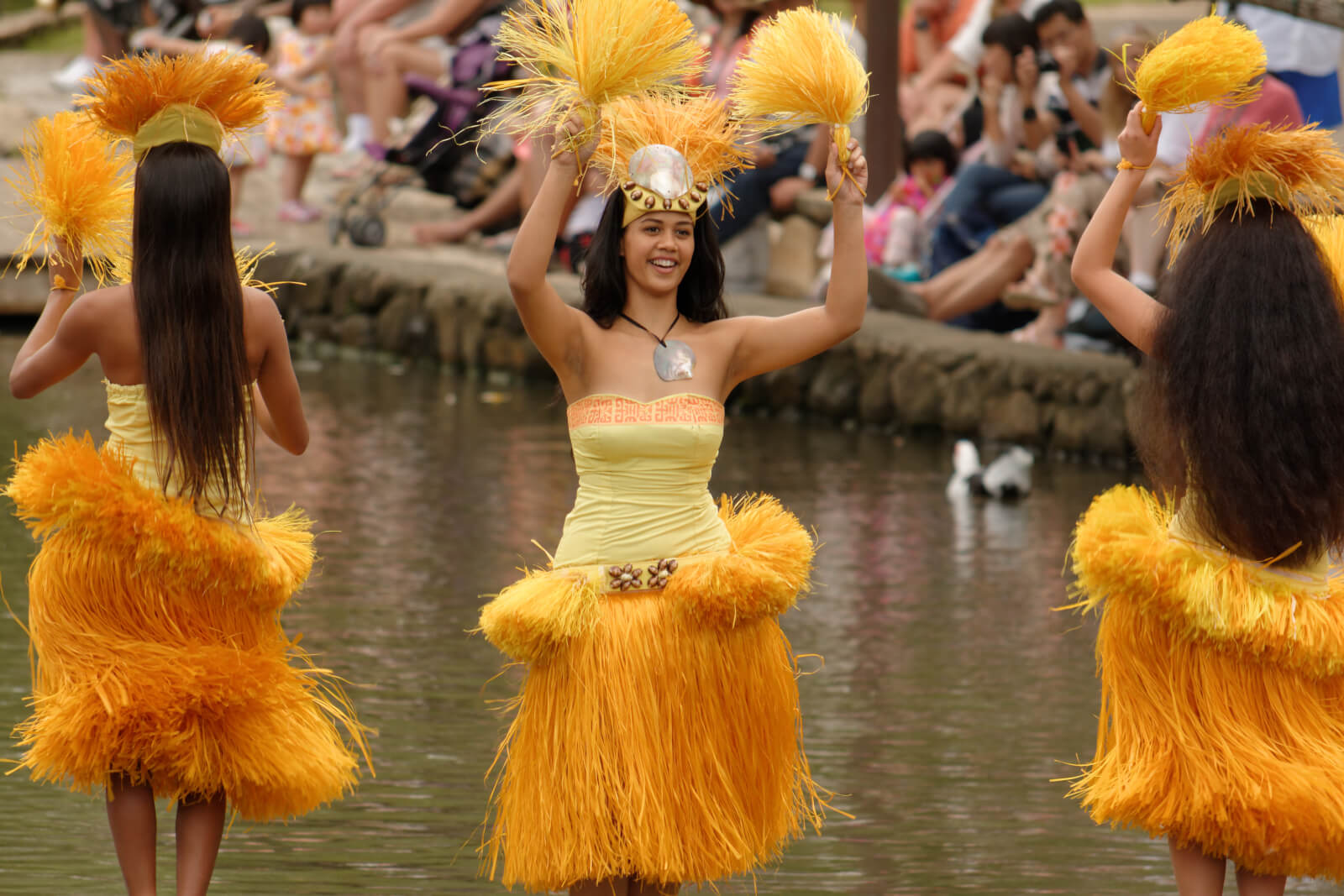 After the performance, we wandered through the six Polynesian villages, viewing the exhibits, listening to the history, and even learning a few new games. We bought a piña colada smoothie prepared in a pineapple. It was different from any other piña colada I’d tasted—the pineapple and coconut milk flavors melded perfectly into a foamy, refreshing concoction. It was gone in a matter of minutes.

Just as our feet were starting to get tired, it was time for the Ali`i Luau. We grabbed a seat close to the stage and admired the scenery. The back of the stage opened to a waterfall and small pool, flowers lining the bank. A huge buffet was set out, including ahi poke and purple taro rolls. We took a bit of everything, eager to try out the many flavors. The performance started as we ate, and we enjoyed the songs and dance of the Hawaiian people before the main event—the pig. Behind the stage, on the bank of the lake, two performers lifted blankets from the ground and pulled a pig up from where it had been cooking in the pit. They paraded the pig up on stage and right past our table before bringing it to the buffet to be served. After, we waddled back to the bus, thankful for the long drive back to the hotel to rest in happy food comas.

Diving with the fish

The next morning I was up and out of bed in record time, snorkeling gear in hand before Michael had even opened his eyes. I was bouncing with excitement as our Uber driver dropped us off at Sharks Cove. Living in Arizona had instilled in me a deep love of the water, but swimming pools have their limits. I couldn’t wait to catch a glimpse of the ocean ecosystem. I plunged into the water, pulling Michael behind me like a kid at Disneyland. We waded into the shallow areas, protected by reefs. The water was so clear we could see the brightly colored schools of fish as they darted back and forth among the cracks and crevices of the coral. We made a game out of it, trying to spot as many different kinds of fish as possible. I brought a sleeve for my phone so I could take videos and pictures underwater and immediately started documenting our finds. Sharks Cove was recommended as one of the best places to snorkel in Oahu, and it didn’t disappoint.

When our skin was prune-y and stomachs begging for food, we dragged ourselves out of the water and headed toward the Pupukea Grill food truck. It was quite busy, but when Michael bit into his kālua pig quesadilla and nodded as he chewed, his eyes shut as he savored the flavor, I knew it was worth the wait.

To kick off our third day in Hawaii, we hopped over to the island of Kauai where a kayak excursion to Hidden Falls, led by the Outfitters Kauai, was waiting for us. Tandem kayaking turned out to be a little more difficult than we’d anticipated, but we quickly got a rhythm down where Michael acted as the rudder and I was in charge of keeping us moving forward. Soon we were at the head of the pack, gliding along the Huleia jungle stream as if we were the only ones on it. The tour guide had told us that scenes from Raiders of the Lost Ark and Jurassic Park were filmed on this river, and it was easy to envision Indiana Jones running out of the jungle and jumping into the water, the way he did in the beginning of the movie.

We stopped paddling to allow the group to catch up and give our arms some much-needed rest. With a breeze on our backs and the sun shining, we admired the view of Haupu Mountain and the surrounding peaks, including a shield volcano. The nutrients left behind by lava make the green of “the garden island” possible; it seemed so contradictory that a scalding, destructive substance could make the right conditions for such paradise. Our tour guide instructed the group to pull aside on the river, and he tied up our boats before we ventured into the jungle on foot.

The secluded spot looked like something out of a movie.

The hike was supremely muddy, which made it even more of an adventure as we navigated the trail to the final destination—the Hidden Falls. The waterfall was small and secluded; it felt like our own hidden oasis. We each got the opportunity to swing from a rope into the water, which took more core strength than I’d anticipated. I plunged into the water prematurely with a squeak, much to Michael’s amusement. The secluded spot looked like something out of a movie. Apparently it was used in the filming of Pirates of the Caribbean: On Stranger Tides. It reminded me more of one of my favorite movies, On an Island with You, a 1948 comedy starring Esther Williams. As I swam back to the shore, I tried out a few of Esther’s signature “barrel rolls” to fully appreciate the moment.

During our return trip we relaxed in style on a motorized canoe. After working out my entire body, I was glad for the rest. We were ready for some downtime, which was perfect, as we had planned quality beach time after our excursion.

Kalapaki Beach was just a short Uber ride away. We arrived in a quaint shopping center, full of Hawaiian knickknacks and memorabilia. We turned to Google for lunch recommendations. The Kalapaki Beach Hut was right next to the beach and had rave reviews, so that made for an easy decision. The building was lemon yellow and looked more like an oddly colored shack than a five-star restaurant, but as soon as we neared the counter I lost my trepidation. They offered a fresh fish catch-of-the-day sandwich.

Suddenly ravenous, I ordered my sandwich with a coffee milkshake, and Michael ordered the Kalapaki Beach Burger with a banana shake. We headed upstairs to the seating area and looked out at the beach from our perch. After taking our first bites, we agreed it was the best meal we’d eaten the entire time. We watched the families playing on the sand as we ate in no rush. Michael slipped an arm around me, and I settled my head on his shoulder as we listened to the waves crashing, the warm day lulling us into the spirit of aloha.

Previous Story
Crown of the Continent
‹
Next Story
Beyond the Strip