“If nothing ever changed, there’d be no butterflies.” My friend gave me the magnet when my eldest daughter, Lauren, left for college. She was the first to go, but with three more kids at home, I had my hands full, and I managed pretty well. My husband, on the other hand, was a bit of a wreck. Lauren is a daddy’s girl, and it had been hard for him to see her go. It was a tradition for the two of them to go camping every Memorial Day Weekend. But last Memorial Day Weekend, our daughter didn’t come home. She had a new boyfriend and wanted us to go to her.

After a unanimous family vote, we agreed. Lauren had just finished up her freshman year at the University of South Carolina at Sumter, and I jumped at every chance I got to visit this charming Southern city. Yes, I was excited about seeing my daughter, but I was also looking forward to checking out Sumter’s annual Iris Festival held at Swan Lake Iris Gardens. I had read about this three-day festival in Southern Living, and also heard about it from my mother. The Iris Festival is South Carolina’s oldest continuous festival. It was actually where my parents first met when they were crowned Iris King and Queen when they were young.

The Iris Festival Pageant was just one of the festival’s highlights. Somehow my nine-year-old got his hands on the schedule of events, and he made sure I knew that he and his six-year-old twin sisters couldn’t miss Just Kidding Around, Children’s Art in the Park, the Bike Rodeo and the annual Shrine Day Parade. I made a mental note of his “musts.”

When we arrived, Lauren took us to her favorite restaurant downtown, and we had the kind of barbecue that could turn a vegetarian into a meat-eater. That meal was just the start of a weekend full of fantastic food. We especially loved the highly anticipated Taste of the Gardens featuring mouthwatering cuisine from the region’s most popular dining establishments and celebrated chefs.

While the food was definitely something to write home about, it was hard to top the flowers. Swan Lake Iris Gardens’ crown jewel is the Japanese iris. Peak blooming season for this extraordinary flower (it has the largest bloom of any iris) is late May. Thousands of people come for the flower show’s elaborate sculpted shrubs and the opportunity to buy iris plants from the master gardeners. My green thumb was inspired by the exotic blossoms, and my younger kids were fascinated by the floral art project displays from the local elementary schools.

From flowers to Ford Mustangs–kudos to the festival planners for creating an event that appealed to so many different interests. My husband, who began the trip pretty bummed about not being on his yearly camping trip, perked up when he heard about the festival’s Head Turnerz Classic Car Show. He ended up spending hours socializing with other car buffs over the hood of a 1964 Corvette. He wanted to buy one and take me for a ride, but I suggested a boat ride on Swan Lake instead. More than 500,000 people visit Swan Lake each year, but the Iris Festival is the only time when groups are allowed out on the lake—providing an opportune time to see the lake’s eight different species of swans on their turf.

With the boat ride and every other effortlessly fun activity behind us, all that was left to do was meet our daughter’s new boyfriend. Begrudgingly, he agreed to leave the festival’s East Coast Scooters Golf Cart Show and meet the kids and me in front of a giant catfish sculpture. Our meeting point was not chosen at random—it seemed our daughter’s new boyfriend, James, a student at Central Carolina Technical College, was quite an accomplished artist, and his metal masterpiece was part of the festival’s Art of Welding display and auction. 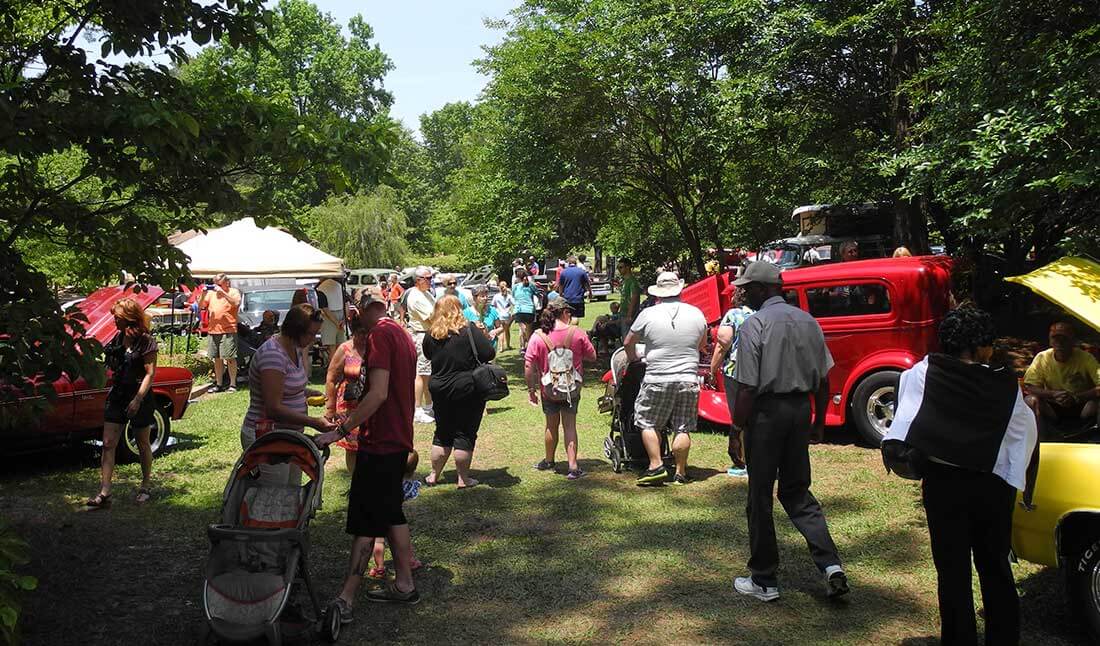 As my husband shook James’ hand, I was pleasantly surprised to see him break into a slight smile. Lauren noticed, too, and I felt a weight lift off my chest. We had been having so much fun at the festival that I didn’t even realize I was anxious about this moment. Our little girl was grown up. While she had spent the past couple days joking around with her younger siblings and enjoying the kind of activities that make everyone feel like kids again, here she was, a young woman—making new friends and living her own life in Sumter.

A year later and our daughter is still seeing James. My husband has accepted the fact that his camping trips with Lauren may be fewer and farther between. I have my eye on our backyard where a catfish sculpture stands tall in a bed of flowers, and any day now, my Japanese iris plants should bloom. As usual, my younger kids are active, but occasionally they slow down enough to remind me that we can’t miss this year’s Iris Festival. I’ve promised to take them, but in return, I made them promise they won’t grow up too fast. But then I have to remind myself that without change, there’d be no butterflies.

See what tradition looks like at the Sumter Iris Festival.