Between work, husband, kid, and friends, it’d been a while since I ventured out on my own. Love my people as I do, I wanted an adventure all to myself. I decided on an overnight trip to St. Louis, Missouri—an easy drive from my home just outside of Chicago, and a chance to visit a new restaurant I had been dying to try: Bulrush STL.

From the moment I heard about Bulrush, I had to get a taste. Owner and head chef, Rob Connoley, created the menu based on historic Ozark cuisine from the 1800s. He sticks to ingredients indigenous to Missouri and faithful to the time period. The concept intrigued me. I made reservations to try the seven-course “Ozark tasting experience.”

I arrived at Bulrush during the dinner hour and entered to find to a sleek, open concept establishment. I sat at a U-shaped bar in front to wait for my table. Polished wood slats sectioned the back half of the shotgun space into a dining area. Soft rock played at a perfectly unobtrusive volume. Cookbooks from around the globe lined floating shelves on one wall; the other displayed a gorgeous 90-foot canvas striped with thin dribbles of paint.

This aura of simple elegance continued in the main dining room, where long black tables flanked an open kitchen, and steak knives with engraved blades were on display at each seat. Other guests at the communal table proved to be excellent conversation partners as we journeyed into the history of Ozark eats. 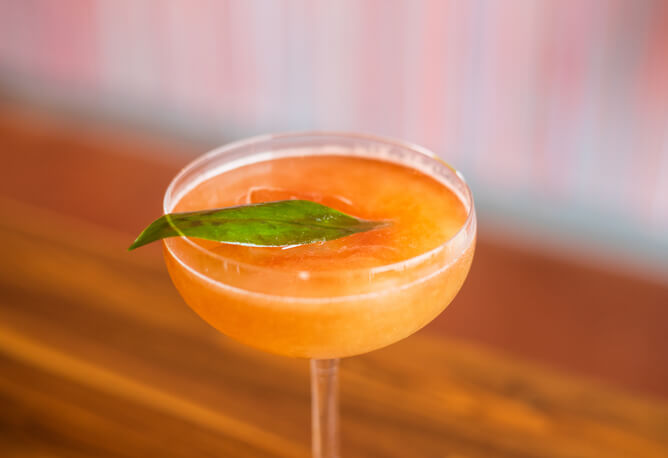 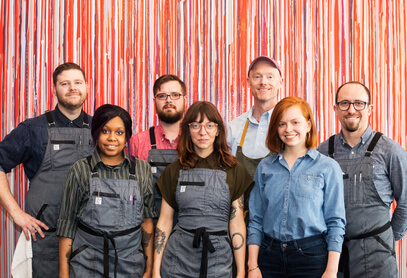 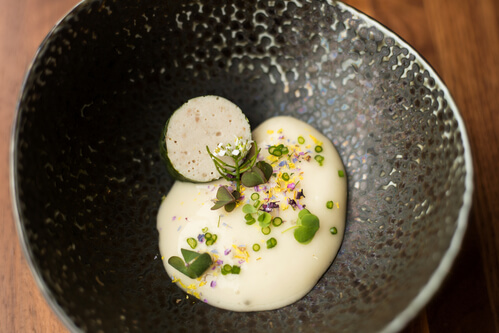 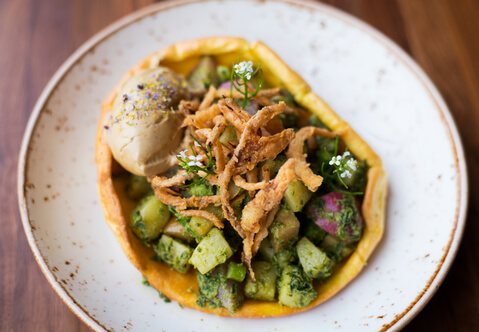 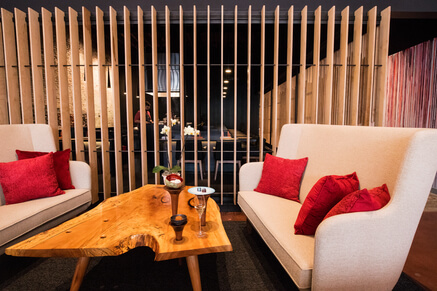 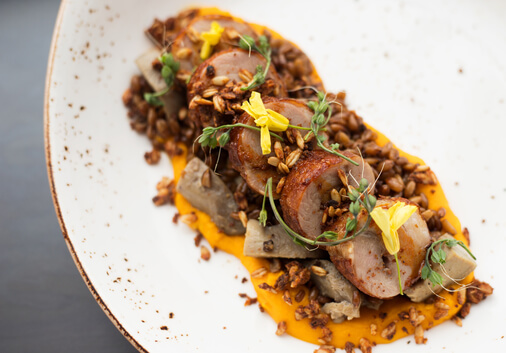 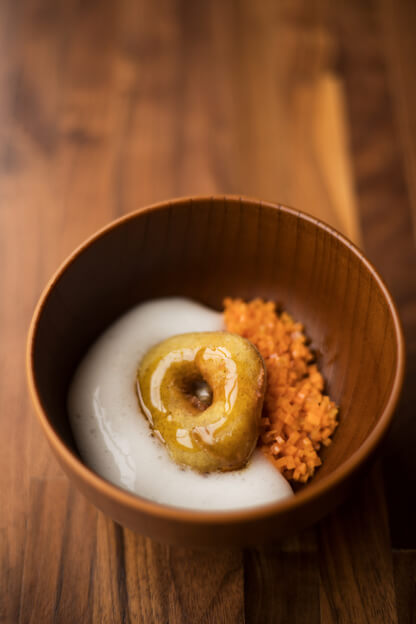 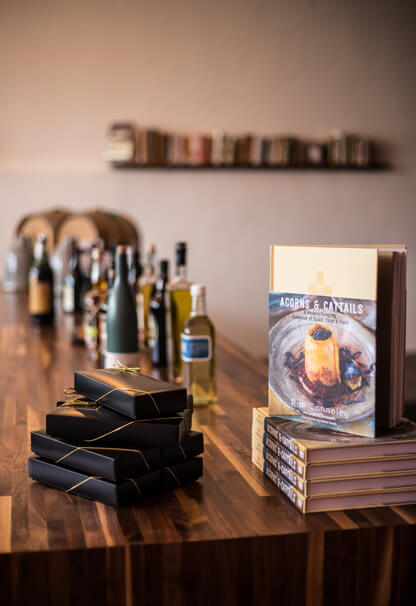 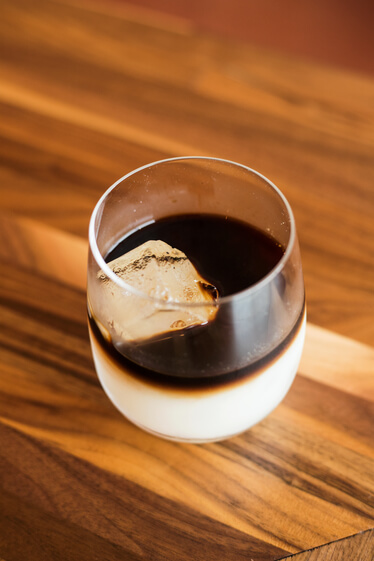 We enjoyed seven courses, each one surprising, yet familiar. Connoley puts a novel twist on staple Midwestern ingredients. I’d had apple and cucumber in salads before, but never mixed with pickled cattail and pawpaw blossom. Likewise, I’d tasted freshwater bass, but never wrapped in mustard leaves with “mushroom cracklin”—who even knew that mushrooms could be fried into something that crackles? I was already familiar with sweet potatoes, but not roasted, caramelized, and drizzled over a savory fermented persimmon donut (you read that right, and yes, it’s delicious).

The beverage director paired each course with Ozark-inspired drinks. The deep fruit flavor of an elderberry cocktail complemented my fried sweet potato, ricotta, and apricot pie. My savory donut arrived with a fermented rice beverage reminiscent of milky eggnog, a perfect match.

At every course, flavors and textures played off each other for a pleasing whole—sweet and sour, crisp and soft, warm meat, and chilled crunchy vegetables. A woman sitting near me who sings with the St. Louis Symphony Chorus compared each dish to the complexity and beauty of a musical performance. We gained insight into that complexity from Rob Connoley himself, who explained the historic use of various ingredients as he personally served us our plates.

The evening was such a success that I wasn’t even afraid to try the dauntingly named “vinegar pie” that was set before me for dessert. With a crisp shell and creamy persimmon miso ice cream, it was exquisite.

A spinning moon on the roof of the chic, boutique Moonrise Hotel in the Delmar Loop, painted half white and half dark, announced the hotel’s location. The lunar theme continued inside with portraits of the phases of the moon in the lobby, artistic moon illustrations in the rooms, and cartoon moons on the “do not disturb” signs. The grand staircase glowed in psychedelic pinks and purples. I could have spent an hour looking around, but I needed my rest for tomorrow’s adventures.

I started the morning hitting up popular St. Louis destinations, beginning with the iconic Gateway Arch. Its subterranean museum tells the story of westward expansion throughout the late 18th and 19th centuries, but my target was the top of the Arch, not the bottom. A tram took me to the arch’s upper interior, a small hall with windows overlooking the city.

From the top, I peered out the rectangular windows on either side. The western view included the domed Old Courthouse and the vibrantly green Kiener Plaza Park beyond it, plus Busch Stadium (home of the Cardinals), all in the heart of St. Louis. To the east, I saw the Mississippi River and my home state, Illinois.

After getting my bearings from above, I spent time exploring the city from within. Without a real plan, I followed my whims for hours—stopping in shops that caught my eye, capturing photos when I felt like it, and going for a treat when temptation knocked.

At Gelateria Del Leone, a coffee and gelato shop, I ordered the Mayan chocolate gelato, which was spiced with cinnamon and cayenne pepper. I ate this kicker of a dish in small bites as I melted into an easy chair at the back of the shop.

I capped my trip off with by spending a relaxing late afternoon in the Saint Louis Art Museum, a stone’s throw from the Saint Louis Zoo (another tempting option). In the high-ceilinged galleries of the magnificent building, I perused art from across the globe and across time periods. I couldn’t possibly see everything during this visit, so I prioritized: definitely mummies and Egyptian artifacts, Georgia O’Keeffe’s work in the American section, and I let myself be pleasantly surprised by whatever I would find in the lower level—which turned out to be ancient African, American, Pacific Islands, and Islamic art.

As I pulled onto the interstate in the direction of home, I was tired but incredibly glad for this break from routine. I wanted to return soon to see more St. Louis attractions like the zoo, the botanical gardens, and the Muny—America’s oldest and largest outdoor musical theater. I really, truly appreciated the solo trip, but I may just have to bring my family along next time to try that vinegar pie at Bulrush.

Next, delve into The New Derby City.

Road Trips Through the South