The air was so ripe with energy it was palpable. Sound waves reverberated into the air above me like a sonic boom. Bass rhythmically thumped the ground beneath my feet, rattling my bones. With not a cloud in the sky, rays of sunshine beat down heavily on my back. Sweat and all, my friends and I walked amidst the droves of festival-goers shuffling to Coachella’s entrance. The cacophony of voices raised in tandem with anticipation. It’d been three long years since the last Coachella and fans from around the world were showing out stronger than ever.

Trunks packed to the brim with camping gear, clothes, and food supplies, my friends and I arrived in Indio Valley late Thursday night. Our three-car caravan quickly assimilated into the congestion of slowly moving brake lights. After a hefty wait and a quick vehicle search, we made our way to the campsite. Only minutes after parking our cars, we were amazed to see an entire neighborhood of tents had already been constructed. Due to the time and lack of light, it seemed there was a unanimous decision to quickly and silently establish tents, tables, and supplies.

Electing to camp at Coachella turned out to be the most convenient and affordable decision of the weekend. With no limit on people per campsite, the $150 total quickly shrunk and divided. The campsite also acted as a home base for anyone that got separated, needed to rest, or got hungry. Smack dab in the middle, our campsite was close to showers, bathrooms, and food. However, with great convenience comes great cost. Luxuries like air conditioning, a large water supply, and an actual bed weren’t readily available. For many, these luxuries are vital for surviving the weekend.

In recent years, as the number of influencers and content creators grew exponentially, Coachella has adopted an entire fashion aspect. Influencers and celebrities adorn designer brands and regular festival-goers pull together their most stylish outfits. Some people wore bright, uni-colored jumpsuits, others wore plain shorts, and t-shirts. Some people bared no skin, others wore minimal clothing. Jewelry was abundant, shimmering around ears, necks, wrists, and fingers.

I’d decided that button down shirts would be my defining look for the weekend, packing eight for three days. Better to have options, right? My goal was to combine fashion and function. The first example of this was a wide-brimmed fedora, off-white button down, and bead necklace combo that made me look like a ranger from the Australian Outback that got lost in Southern California. Throw a fanny pack around those hips and boom, you’ve got function and fashion all in one. However, the absolute best, most comfortable, most stylish clothing decision of the weekend was a pair of white, canvas pants. Not only did they provide airflow and breathability between the legs, but also a blank canvas to build an outfit on. Perfect for wearing them three nights in a row. 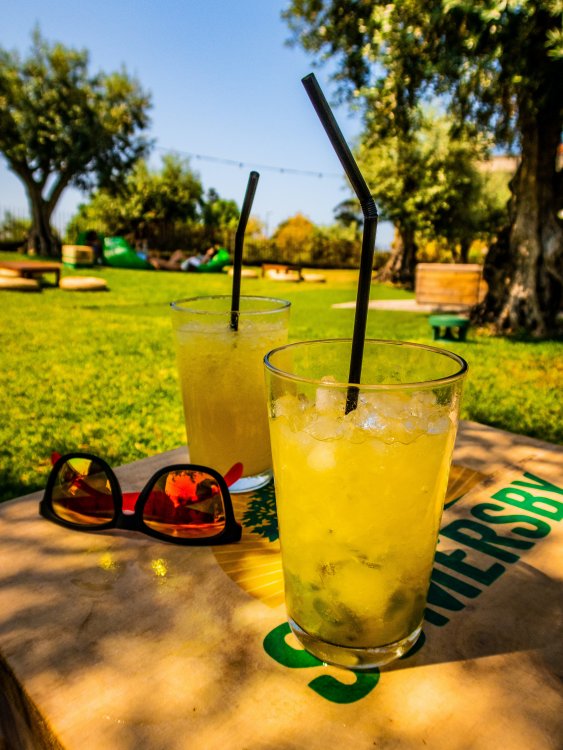 “…we laughed our way through ice cold cocktails and craft beers.”

With the temperature sitting comfortably in the 90s all weekend, overheating and dehydration quickly became concerns. Thus, shade and water just as quickly became our priorities. The best way we managed to keep a steady supply of water was constantly refilling everyone’s Camelbacks. No matter how full it was, we paused, chugged, and topped off at every water station we could find. Alongside the constant replenishing of water came an adamant need to reapply sunscreen. Now that our skin was protected from the sun, it was time to cool our bodies from the inside.

Fortunately, my friends and I are all over 21 years old. Even more fortunately, there was a large craft beer garden in the center of the festival. Sitting in a circle on the grass, we talked, we ate, and we laughed our way through ice cold cocktails and craft beers. Don’t get me wrong, water is unmatched when it comes to refreshment, but I have to say that those pina coladas came pretty darn close. As for food, I consider myself somewhat gifted when it comes to locating a delicious meal. This claim was backed by a single chili cheese dog, topped with Japanese kewpie mayo, nori seaweed, and truffle hot sauce. It was quite possibly the best hotdog I’ve ever eaten.

A Sea of People

Despite the diminishing heat and increasing breeze, nighttime brought along its own concerns. The most dramatic of which was navigating through the crowds. It became exceedingly difficult for us to track each other as we bobbed and wove through jagged rows of people. Without a totem (AKA big visible objects that the line leader holds up) we had to link arms and constantly make sure we had everyone together.

At night, as crowds grew denser and sunlight diminished, the grounds became much harder to navigate. As our only light sources became the bursts of neon lasers from nearby stages, it became crucial to establish landmarks in case we got separated. Sometimes the landmark was a lemonade stand or giant color tower. Other times it was the third light pole from the front, to the left of the white pool noodle. Clearly, there was a range in landmark specificity. The relationship between setting landmarks and navigating the masses became most apparent on Sunday night, when I had to direct two of my lost friends to find our group. It was the headliner show and the crowd seemed to number over 100,000 strong. We were positioned right in the middle, just a short distance behind the technical equipment, close enough to view the whole stage. Had it not been for the triangulation of landmarks and a gratuitous pinch of luck, our separated friends would have been lost to the crowd.

Music is the beating heart that defines the atmosphere at Coachella. From the indoor, deep-house Yuma tent to the expansive Coachella stage to the all-day dance party at the Do-Lab, each stage feels like its own unique world. These worlds can be explored and discovered, leading to new favorite artists or songs. For me, that new world came across the Atlantic Ocean from France. L’Impératrice is a French pop and Nu-disco group that redefined the word jiggy. As soon as lead singer Flore Benguigui’s voice broke the silence, it was an all-out dance party. The group even went off-track, improvising some songs that turned out to be among their grooviest. Seeing their show as an introduction to their music served as an important reminder that Coachella was the perfect opportunity to expand one’s musical horizons.

A two hour set by Swedish House Mafia (SHM) and The Weeknd on Sunday night was the pinnacle of the festival. As lasers sparkled through the dusty air and the beat began to climb, a wave of energy could be felt washing through the crowd. Almost simultaneously, every head in sight began to bob and hips started to sway side to side. The music seemed to triumphantly reach for the heavens. For Moth to a Flame — the only song featuring both artists — The Weeknd’s ethereal voice combined with SHM’s rolling bass to create a truly cinematic effect. Vocals paraded across the air while bass rumbled through the ground forming a black hole of sensory stimulation, impossible to escape.

Good for the Soul

If music were the heart of Coachella, then the happy people are its soul. Constant bouts of laughter, giant group hugs, endless smiling faces, and shared experiences elevated our bonds of friendship to new heights. However, as much as I love each and every one of my friends, the person I was truly grateful to share this experience with was my younger sister, Ellie. An indescribable warmth and sense of gratitude filled my stomach as the person I cherish most in the world stood right by my side. In the end, perhaps people are what the Coachella experience is all about. Music is an unbreakable glue that binds all of us, spanning across age, race, gender or culture.

Previous Story
Traveling with Dogs
‹
Next Story
Explore Flagstaff, AZ All Seasons Through the Eyes of a Local

The Weird and the Wonderful: The South